In this example, you show how to learn SP associations using interneurons that learn a sparse representation of their input in an unsupervised manner, and learn a transformation with supervision.
I’m wondering if there could be a way to learn correlational associations through a single synapse (i.e. with no interneurons), and in a pure unsupervised fashion?

Note that the single synapse constraint is less important than the unsupervisedness.

To provide a bit more context, the idea would be to model cortical priming. At first, external input would be necessary to drive buffers A and B. B would learn that when x is fed to A, y is fed to B. Then, x in A would prime y in B in the absence of direct input to B. Is it even possible to learn a simple communication channel this way?

To answer your primary question:

Is it even possible to learn a simple communication channel this way?

Yes, it is! I believe the most straight-forward way to learn such a communication channel is to use the PES learning rule. However, playing around with Nengo, I believe it is also possible to do this using an STDP learning rule. I’ll elaborate on both of these approaches below.

PES Learning Rule
Using the PES learning rule to learn this sort of communication channel is similar to the method used in this example. This network is also pretty much the pre-cursor to the example you linked in your original post. Basically, you’ll need to create a network that looks like this: 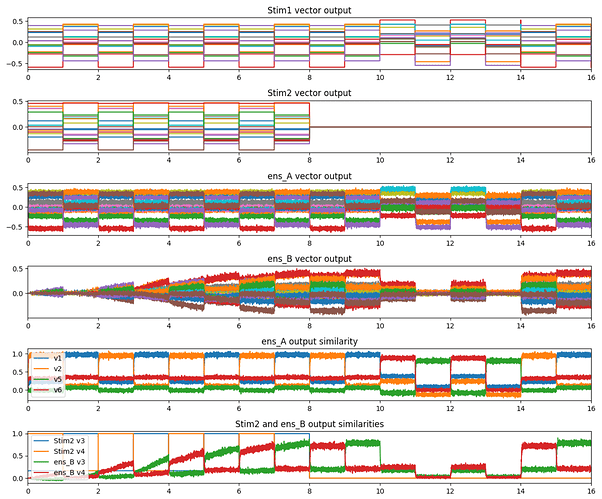 The graph above was produced by this code: example_pes.py (6.3 KB)

In the graph, the first half of the simulation (first 8 seconds) is the model’s training phase. After this, the learning is inhibited, and the network is presented with one presentation of the two vectors used in the training phase (v1 and v2). Next, two presentations each of two vectors novel to the model is shown. This is to demonstrate that for untrained vector inputs, the model doesn’t produce much of an output (as expected). Finally, two presentations each of the trained vectors are shown again, just to demonstrate that the learned weights are persistent, especially after the presentation of the untrained vector inputs. As mentioned above, the training phase is stopped by inhibiting the error population. The Stim2 output is zeroed out as well (this doesn’t affect the network though) just to show when the training has stopped.

The STDP Approach
This approach uses the STDP code which I discussed in this forum post (also attached below). With this approach, the idea is to feed the A and B populations with the respective vector pairs, and use an STDP modulated connection between A and B to strengthen connections such that when the subset of A neurons that fire in response to x, the corresponding subset of B neurons also fire to reproduce y. With this approach, the network will look like this:

And here’s a graph of the network in action. 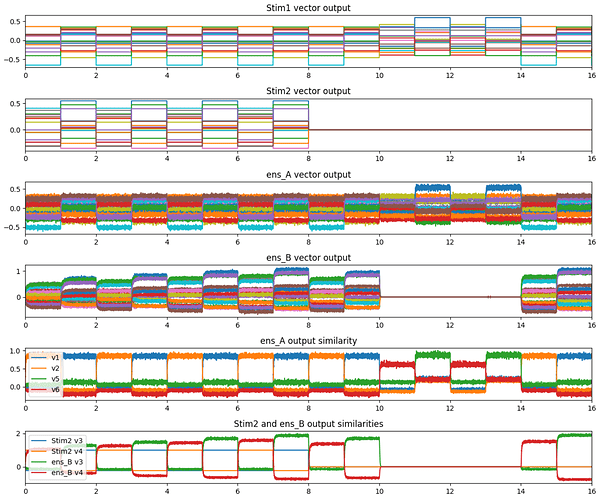 Here’s the code that will reproduce the results above: example_stdp.py (6.3 KB)
You’ll require the custom STDP module (stdp.py (15.9 KB)) to run the code above (just put both files in the same folder).

General Code Comments
If you run both example codes, you’ll notice that in both cases, the model is seeded with a random seed. This is just so that you can run the code and reproduce the exact results shown above. I encourage you to test the network without the seeds and observe their stability and effectiveness. From my own experimentation, the PES approach (without Voja) is more sensitive and less stable than the STDP approach. But I’d expect it to be much more stable if Voja is introduced into the model.