I’m trying to make networks with dendrite-like multi-layer perceptron features. I call these MLPs “dendrites” because they are tree graphs like many biological dendrites, and each neuron gets non-permutable inputs from heterogeneous “synapses,” unlike with weighted addition followed by a filter (i.e. nengo.Synapse).

It is perhaps related to BioSpaun from @jgosmann. The difference is that, being MLPs, they have nonlinearities but not conduction delays/states. It also might fall under a more traditional, weight-level neural modeling of the type described in @tbekolay’s post.

Sorry for the long and kind of vague post. I’m not sure if this is a Builder, Solver, or Nengo DL question. Any sort of partial advice would be helpful! I think it comes down to two parts.

where L_4x2 means some 4x2 numpy array. See picture below.

The builder order of operations would look something like this pseudocode

where DotSet is an imagined Y[...] = A.dot(X). I have already made the synapse Process - it is element-wise.

The point is that a spike arriving at a synapse at timestep i should be able to have an effect on the soma at timestep i.

It seems you could fold these “dendrites” into a fancy nengo.Neuron with some step_math composed of a bunch of Sigmoid functions; however, this would require a nengo.Neuron with a vector of inputs, instead of just scalar J. Is that possible?

Like the example above, another option is to make each layer of the MLP its own Ensemble; however, that ends up stacking timestep delays and internal states associated with the “DotInc” operators (hence why I made up the “DotSet” operators). Is there a way around that?

2. Getting the optimizer to recognize these patterns

Each dendritic subnet as well as each “synapse” Process are conceptually parallelizable – regardless of network topology – but the simulation optimizer does not recognize this if the neurons are constructed individually.

The number of operations is theoretically constant in this case:

where basically all of the Dot steps should now be sparse BsrDot, just like what happens when you have a network of multiple Ensembles. Instead of step growth (bad), I’m looking for memory chunk growth (good).

I have tested both ways of initializing this type of network: neuron-by-neuron vs. layer-by-layer, and it made a big differece in speed - ridiculously big if you are using a GPU.

This seems like it will need a customization of either an operator or the optimizer. Both of these are pretty confusing to me. Any ideas/pseudocode on how to approach this? 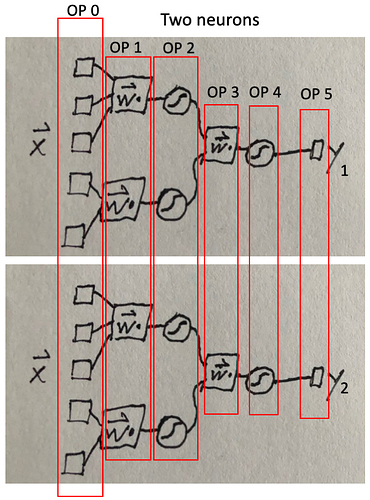 Hi!
Great to hear that you’re looking at implementing these kinds of interesting dendritic computations with Nengo. @astoecke, a grad student working with Nengo here in Waterloo, has actually put together a work-in-progress library that includes support for dendritic computation by allowing an arbitrary number of ensembles as pre-objects in a connection: https://github.com/astoeckel/nengo-bio. This might be a useful place to start, and I’m sure Andreas will be happy to answer any questions you run into.

Regarding the issue of delays, it’s actually the SimProcess operators on the connection synapses rather than the DotInc operators that are introducing a one tilmestep delay. If you want to get rid of the delay, you could use you could use SimProcess(..., mode="set") instead of SimProcess(..., mode="update"), and that should do the trick. If you still want to play around with a DotSet implementation, it should be equivalent to Reset(0) + DotInc, which can be done with existing operations.

Hope that gives you some material to work with, but let us know if you have any follow-up questions!