I am trying to convert a Keras CNN model into a spiking one.

Following the tutorial (https://www.nengo.ai/nengo-dl/v3.3.0/examples/keras-to-snn.html), I changed the scale of the firing rate to improve the accuracy. Scaling the firing by 200 indeed results in good accuracy.

However, I observe a strange trend which is that increasing the scale of the firing rate decrease the total number of spikes (the sum of all spikes emitted at each layer) emitted by the network during inference. 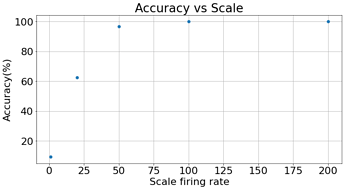 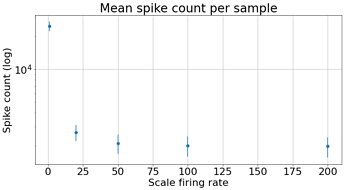 How can I interpret this? Why does the network emit less spikes instead of emitting more of them as the scale increases?

Thank you for your help!

It is most likely because of how you’re measuring firing rates.

In Nengo, we allow neuron types to have an amplitude, which is a scaling value that we apply to all spikes coming out from that neuron. When applying scale_firing_rates, what we do is scale up the input to neurons by a factor of scale_firing_rates, but scale down the amplitude by a corresponding amount. This allows the neurons to fire more frequently, while keeping the time-averaged output the same (so that we don’t have to rescale the weights in the network). Because of this, if you try to measure the firing rates just by averaging the neural output over time, you’ll get about the same value no matter what you choose for scale_firing_rates.

There are two ways to work around this. One is to get the neuron amplitude for the ensemble and explicitly divide it out:

For both of these examples, I’m using the same variables as the notebook you referenced (e.g. conv0 is the tensor out of the first Keras convolutional layer, nengo_converter is the nengo_dl.Converter, sim is the nengo_dl.Simulator), so hopefully things are clear.

Hello @duzzi, along with @Eric’s reply you might find this useful to understand the behaviour of scale_firing_rates in detail.

I use SpikingRectifiedLinear(), which can spike more than once per timestep, if I understand correctly.
My solution to compute the number of spikes per neuron across the simulation is the following:

where probes are a list of probes of neurons.

Is my solution correct, or should I multiply the result by scale_firing_rate value?

Thank you @Eric ! It is clear now.

My edited code is:

But I am experiencing strange behavior as total_spikes_per_neurons takes values 0.001 and 0.01 for example.

Thank you for your help.

Your problem is that you’re scaling by dt twice. You want total_spikes_per_neurons = np.sum(sim.data[p] * dt * scale_firing_rate, axis=0).

With the converter, we use scale_firing_rates to scale the input weights to each neuron, thereby changing the firing rate, and we scale the amplitude in the opposite direction so that the sum of the output timeseries remains the same. So if you go back to that neuron at 500 Hz, if we have scale_firing_rates = 0.5, then the firing rate will get scaled to 250 Hz, and the amplitude will become twice as large. So you would get a timeseries like [0, 0, 0, 2000, 0, 0, 0, 2000, ...]. As you can see, this has the same sum (over time) as the previous output, but the neuron is firing half as often (but each spike is twice as large).