I have nengo model and I need to add it some part that solves (non linear) optimization problem.
I need to find N dependent values that minimize some non linear objective.

Since I want to minimize the objective, I can’t use PES. I mean, something like PES, but instead of error, minimize objective. Is there such optimization solver in nengo?

From your problem description it seems like you might want to use NengoDL for your optimization problem, rather than just the standard Nengo. NengoDL allows you to train your Nengo networks similar to TensorFlow (in fact, NengoDL uses TensorFlow in the background). Note that NengoDL / TensorFlow is typically an off-line training method whereas the PES learning rule is on-line (i.e., as the network is being simulated).

Since I want to minimize the objective, I can’t use PES. I mean, something like PES, but instead of error, minimize objective. Is there such optimization solver in nengo?

Thanks for the reply, but I don’t think its related to NengoDL. I don’t want to train a network, but use something similar to PES.

I want something similar to that, but instead of error, reduce some loss function or objective function.

For example, in a “regular programing” I would use `scipy.optimize.minimize" as a solver, not training a network…

I just want to use “neuromorphic optimizer solver” instead, if these is such thing…

This is interesting since it is not that simple. I tried to do so, and this is the reason I opened this thead…

Say I have two ensembles A and B which encodes constant value of 0. My goal is to find decoders that will being a values that minimize A^2+B^2+(A+B-0.5)^2. The optimal solution is decoders that brings both A and B to something around 0.2.

But using this objective function as PES input, not working. The objective function is always positive, so PES see a positive error and bring A and B down (instead up). At the end, PES finds decoders that brings both A and B to -1, and the cost function is much higher than the original value, which is wrong…

How can I find the right decoders that minimize that objective function?

You are correct in the observation that for the specific objective function A^2 + B^2 + (A+B-0.5)^2, applying it naively to the PES rule will not work. This is because this specific function is always positive. Worse still, at the minima of the objective function, the value is non-zero. For other readers that want to know why this is an issue, I’ve explained it further down in this post.

In order to build a working system then, you’ll need to reframe the PES error value such that it has a positive and negative value, depending on which way you need the decoders to be adjusted. For this objective function in particular, the gradients (partial derivatives) of each variable in the objective function can be used to provide such a signal. The gradient is particularly useful in this scenario because the objective function is at a minimal value when the derivative of it is 0. Additionally, the gradients have the right sign, where a negative gradient should drive up a value, and a positive gradient should drive down a value.

For your particular problem, using the gradient as the PES error signal is straightforward. Changes to the value of A should be driven by \frac{\partial f}{\partial A}, and changes to the value of B should be driven by \frac{\partial f}{\partial B}. You can implement this in Nengo multiple ways, either with one ensemble each representing A and B, or you can have one 2D ensemble representing both A and B. Other than that, all you need to do is to compute the partial derivatives, and use the result as the learning rule error signal. If you have two ensembles for A and B, you’ll need two connections and two error signals. If you used one ensemble, you can combine both partial derivatives into one 2D error signal. In the code snippet below, I’ve used an ensemble each for A and B.

If we run this code, we get a plot like so:

And from this plot, we can see that the system does converge to approximately the correct values – according to Wolfram Alpha, the objective function is minimized when A=1/6 and B=1/6.

Now, this approach may not always work, and is dependent on the objective function used. Regardless, the key takeaway from this exercise is that to get around the limitations of the objective function (i.e., it never going negative), one needed to reframe the problem and find a way to generate error signals that could be used with the PES learning rule. 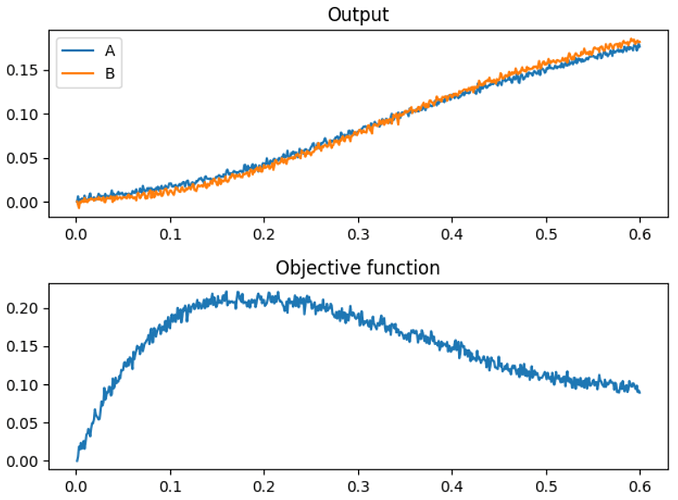 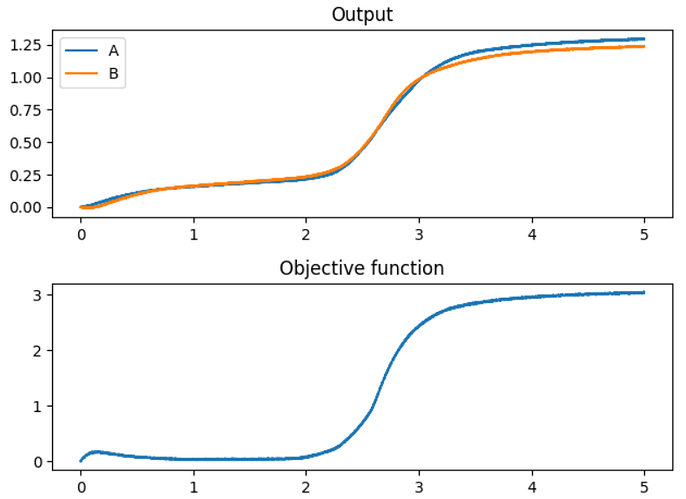 Thank you so much @xchoo. Actually, it would be cool to implement a learning rule that does that automatically even for more complex objective functions that their derivative is not straight forward, like other optimization solvers. But this is more than enough for me! Thanks!

Another thing is that your implementation is a simple gradient descent algorithm. Which may not work so well for a more complex objective function.