There are a few key features needed for such a function to be used as an “inverted” inhibitory signal:

Now, let’s see how to design such an ensemble. So, we start with a regular ensemble:

Next, let’s do the 1-x function. Typically, we’d put it on the output connection, but in this case, doing so will violate the second feature (that no spikes are to be produced when the output value is 0). We can solve this by feeding the inversion output into an ensemble with adjusted intercepts, but in this case, we can thankfully do it all in one ensemble, simply by shifting the function computation from the output of the ensemble to the input of the ensemble. We can do this because the function being computed is a simple addition (or subtraction). Since the function being computed is 1-x, we’ll need a bias input, and a -1 transform on the inhibitory value input:

You may notice that the connections above do not solve the “no spikes on 0 output” issue, but since the function is being computed on the input to the ensemble, we can tweak the ensemble parameters to accomplish this. To ensure that the ensemble is only representing positive values, we set all of the encoders to [1]. Next, we modify the intercepts of the ensemble to be between (0.5, 1) (instead of the default of (-1, 1)) so that the ensemble will only produce output spikes when the input is above 0.5:

And that’s it! We can then use the output of this inversion ensemble as the inhibitory input to whatever we want to inhibit:

And here is what the output of running the code is: 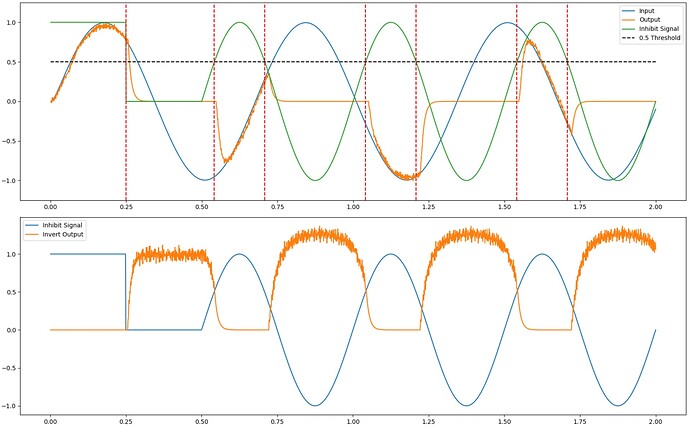 I am not sure if I should create a new post or continue in this one. I need some some clarifications on statements that you mentioned in your answer, so I am replying on this thread.

I am trying to implement Not Logic gate. Instead of

I want when input node is 0, output is 1 and vice versa, but I want a connection to inhibition as well. I am trying to understand the inhibitory connection. There are certain statements that I did not understand.

Could you please clarify the following?

Since the function being computed is 1-x, we’ll need a bias input

Could you please elaborate on it?

Typically, we’d put it on the output connection, but in this case, doing so will violate the second feature (that no spikes are to be produced when the output value is 0)

Thank you for your time:)