I feel really silly but I can’t work out how to import my custom modules in Nengo GUI. When running my script from the terminal, from the tests folder, I usually do it as:

My directory is organised as:

And I import file.py into main.py as:

I cannot work out how to do the same in Nengo GUI. I have tried adding

to my script but to now avail.

As a quick check, if you run nengo from the Project folder like so:

No, still the same ModuleNotFoundError .

Okay. So I tested this setup and it seems to work:

The contents of main.py

I think you might have been missing the __init__.py file in the library folder. Without that file, python imports will not work.

It still doesn’t seem to work in the GUI, even with the __init.py__ in there. It obviously works fine from the terminal or in my IDE but I just can’t seem to understand how to make it find the package in Nengo GUI. 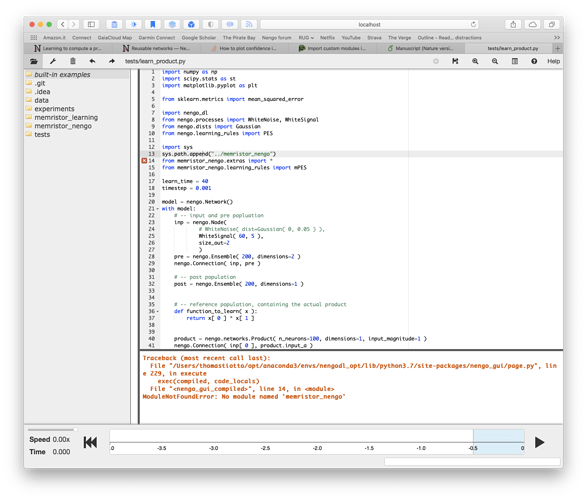 For your use case, if you start Nengo from the <root> directory, you’ll want to do:

You can also use absolute paths (instead of relative paths) in sys.path.append to get the import to work from any directory.

Unfortunately, still no luck.
I’ve added the __init.py__ to the package, launched nengo from my root project folder, and tried to import with sys.path.append("memristor_nengo") from the main that is in root/tests.
I still get 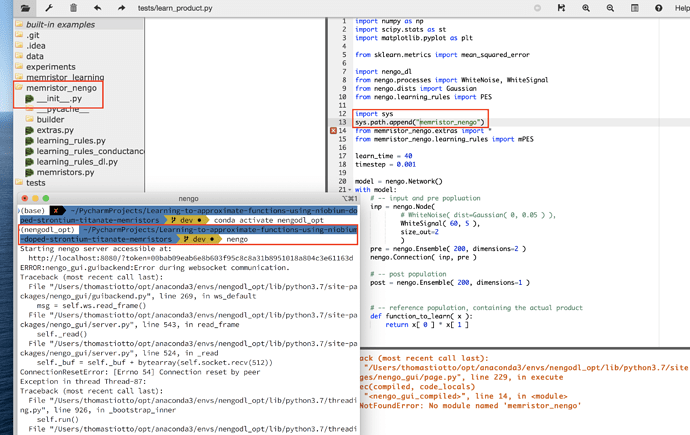 Ah. I see your issue here. You are importing your modules as

Therefore, if you use from memristor_nengo... import ..., you’ll want to do sys.path.append(".") instead.

Or, if you want to do sys.path.append("memristor_nengo"), you’ll have to do from extras import * and from learning_rules import mPES.

It was so simple… It works now, thank you!