How to realize the inhibitory connection between neurons

Hi，everyone！
I am trying to build a bionic network. How to realize the excitatory and inhibitory connection between neurons?
I have tried to set it like this:
weights = np.ones((B.n_neurons, A.n_neurons))
conn_demo=nengo.Connection(A.neurons,B.neurons,transform=weights)
The weights are all set to 1, I think the B neuron will completely convey the A neuron’s signal. But this is not the case.
Where did I get it wrong? How should the excitatory and inhibitory connections between neurons be expressed? I would be very grateful if you can answer my question.

Hello @YL0910, I am not sure how much will I be able to help you but thought to let you know of nengo-bio which supports explicit excitatory and inhibitory connections. Here is the GitHub link and the repo is maintained by @astoecke. I haven’t used it at all. With nengo I have used explicit negative weights to symbolize inhibitory connections.

BTW, you might want to check your last sentence in your question!

Oh… I’m sorry for such a mistake. Thank you for your answer! I have tried using nengo-bio, but it doesn’t seem to be able to use nengo-dl.

With nengo I have used explicit negative weights to symbolize inhibitory connections.

Hi! Perhaps I can help you with your questions:

I am trying to build a bionic network. How to realize the excitatory and inhibitory connection between neurons?

There is a fairly large github thread discussing it, with an example Nengo model defined here. Not that this uses the Dales solver from the parisien branch of the nengo-extras repository. The Parisien transform can also be done using nengo-bio with example code here.

I’m not entirely sure what your use case is, but you did mention NengoDL in your original query? If you are using NengoDL, some work will be needed to convert these example for use in NengoDL.

The weights are all set to 1, I think the B neuron will completely convey the A neuron’s signal. But this is not the case.

What you are observing may be a result of a slight misunderstanding of what information Nengo is showing to you. When you do something like this:

You’ve almost got it in the original example code you provided. Creating an inhibitory connection in Nengo works something like this:

If connecting from another neural ensemble:

There is also an example of creating inhibitory connections in our NengoGUI. You can find it under “built-in examples” -> “basics” -> inhibitory_gating.py

If you don’t have NengoGUI installed, you can find instructions on how to do so here.

Thanks @xchoo for a very informative answer. @YL0910, the way I explicitly mentioned inhibitory connections between two neuron populations is as follows. It is similar to the way @xchoo has suggested.

Note that my use case was with recurrent connections, therefore I created one which computes a linear transform function which is denoted by the matrix A_p. Now we need the explicit weights of the neuron connections which we can obtain the following way:

Once you obtain the W matrix you can create another model with explicit weights between ensemble neurons as follows:

Note that I am using the same seed values while creating the model and ensemble ens_x. Hope this helps.

Hi,xchoo!
I am very happy to see such a detailed answer. By the way, I have studied the tutorial of neno-gui, as shown in the figure, why is the value of A ensembles not 0 when transform=-1?

why is the value of A ensembles not 0 when transform=-1?

The short answer is that you should set the value in the transform to something larger (e.g., [-5] instead of [-1]) to fully inhibit the ensemble in this example.

The longer answer has to do with the default tuning curves of the ensemble, and what they will cause the ensemble to do in the absence of any external input current. You can see that even if you don’t provide any stimulus or inhibition to the ensemble, as in:

(and nothing else) you will see approximately half of the neurons spiking. That is because the tuning curves are distributed by default to be uniformly tiled and randomly flipped across the range [-1, 1]. More specifically, each neuron has an associated bias term that can cause it to spike even in the absence of external current. This is beneficial in typical cases because it allows the ensemble to compute nonlinear functions across the interval [-1, 1] of represented values, but you can also change this behaviour by configuring the tuning curves of the ensemble (through the gain and bias, or equivalently the max_rates and intercepts). You can also right-click the ensemble in the GUI to display the tuning curves.

Some resources that may be helpful for more information:

To expand upon what @arvoelke posted specifically looking at the network you included in your post, the reason why the output of the A ensemble is not 0 when transform=-1 is as follows: 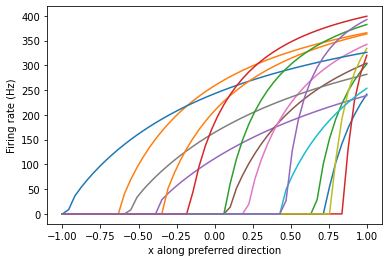 We can see from the response curves that for an input value of x = 0, some of the neurons are still active. This indicates that the ensemble is not fully inhibited and will produce an output (like you see in your network).

As a general rule of thumb, when designing Nengo networks with inhibition, you’ll want to make sure that:

For your network in particular, the maximum_expected_ensemble_input = 1, and minimum_inhibition_input_value = 0.5. That means that in order to achieve a fully inhibitable ensemble, you should use an inhibition_transform of (-1 - 1) / 0.5 = -4.