Ensemble’s output seems to have only 1.5 upper and lower limits.
Why is this, and is there any way to solve it?
The values in ifinp are imported from the file. 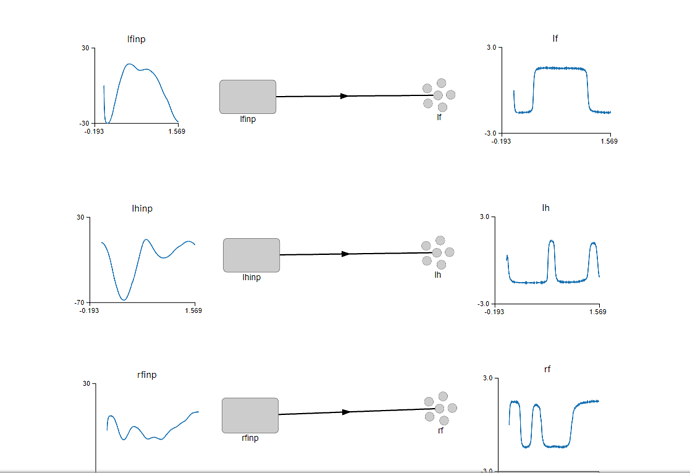 In Nengo, values being represented by ensembles are actually encoding these values in spike rates. That is to say, some input to the ensemble corresponds to a specific output firing rate. Nengo uses the NEF algorithm to figure out how to map these spike rates back to real-time values. One important step to this mapping is to decide what input values map to what output spikes (and conversely, what output spike rates map to what output values). Since this mapping is arbitrary Nengo uses a default range of -1 to 1 to do this mapping. That is to say, the input and output weights of the ensemble are optimized for this specific range of input values.

To solve this issue, you have to tell Nengo what value ranges you expect the neural ensemble to be able to represent. You do this by setting the radius parameter when you create the ensemble object. As an example, if your data has an expected input range of -100 to 100, then you’ll want to set your ensemble’s radius to 100: