Hey folks!
I am new to Nengo and confused about some concepts pertaining to supervised learning and spiking neurons. It’d be great if I could get answers to some of these doubts:

I’ll attempt to address your questions below:

The difference between these two connection types has to do with the way the Neural Engineering Framework (NEF) formulates connections. In the first case, Nengo is constructing a connection where the connection weight matrix has effectively been factored into multiple parts: encoders, decoders, and a transformation matrix. You can read more about what these components do here and here.

and how does this change the network and outputs?

If I want to train a Fully Connected model, using specific input-output pairs (as is done in non-spiking neural nets in tensorflow - model.train(x=x_train, y=y_train)) what should I do? I want to do this using Nengo and not Nengo-DL.

The Nengo documentation includes several examples of how to include learning in your Nengo networks. To learn input-output pairs, this example in particular may interest you.

If I want to train a Fully Connected model

The code below illustrates how learning can be done with fully connected ensembles in Nengo.

How do I extract weights from above model?

To extract the weights from the example code above, you’ll first have to create a Nengo simulator object, and then run the simulator. The code below does this, then extracts the code after the simulation has completed:

How do I give vector inputs as spikes directly to neurons

You can input spikes to an ensemble of neurons using a nengo.Node. Keep in mind that when you do this, the spike value should be 1/dt, where dt is the dt used for your Nengo simulation (defaults to 0.001s) The following code is an example of how to do this (the spike_func is just a random spike generator that doesn’t really do anything but produce random spikes for the first 0.25s of the simulation)

How to get the outputs as spikes on the second ensemble?

To record spikes from any ensemble in a Nengo model, use the nengo.Probe functionality, like so (this carries from the previous example code):

By default, Nengo generates randomized values for the biases and gains for each neuron in an ensemble. This in turn randomly generates maximum spike rates and intercepts for the neural response curves.

You can change the spike rate of neurons by specifying the max_rates parameter when creating the neural ensemble. The following code generates an ensemble of 50 neurons with firing rates from 100-200 Hz. 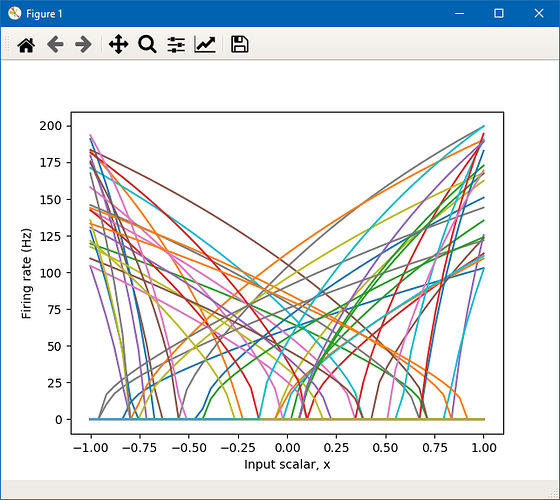 You can fix all of the neuron firing rates to the same value by using the Choice distribution. The code below shows how to create an ensemble of 25 neurons, all of them with maximum rates of 50 Hz. 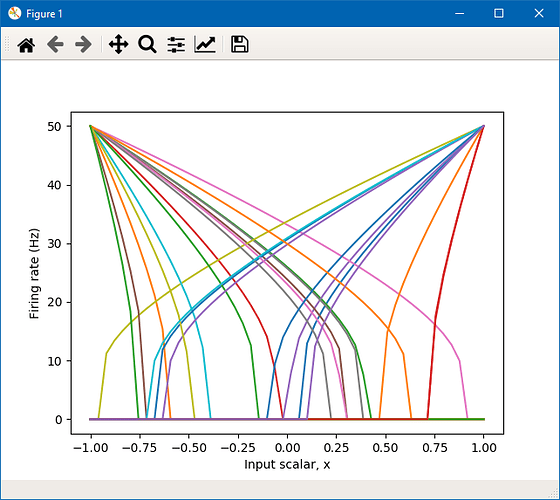 Hey @xchoo! Thanks a lot for the detailed explanation and the examples. Found it really helpful

I wanted to follow up on your answer to my Question 4 (recording spikes of an ensemble’s neurons).

The shape of the spikes output data is $T\times N$, where $T$ is the number of timesteps the simulation has taken, and $N$ is the number of neurons in the probed ensemble. Thus, each row of the data corresponds to each timestep (i.e., the first row is for $t=dt$, the second row for $t=2dt$, and so forth), and each column of the data represents the spike output for a specific neuron. If the neuron has spiked, a value of $1/dt$ is recorded, otherwise, $0$ is recorded (in the example above, $dt=0.001s$)

how would I get which neurons have spiked in a specific time interval?
Say in time (t>3 and t<3.2)

Since the returned probed data is a numpy matrix, you can use numpy’s conditional indexing to get information for specific values of $t$. As an example, to get all spiking data for $3>t<3.2$, you would do:

then convert this to a binary vector using some condition: if (spike(neuron[i])==True):output[i] =1 (for example, for the ith neuron)

As a note, you can specify the value of $dt$ used in a Nengo simulation by providing the nengo.Simulator object with a dt parameter. The default is shown below:

@xchoo thank you so much! That’s really helpful!

Could you please tell me what these 1000s actually represent? Are they the post synaptic current, which serve as input current to the next layer?

The 1000.0's in the spiking data are the spikes generated by the ensemble. Each 1000 is one spike, and the value (1000) is calculated as $1/dt$. In biological sense, this would be equivalent to the spike (current) travelling down the neuron’s axon.

Hi @xchoo, are these currents (input and output) in amperes?

are these currents (input and output) in amperes?

No… Unlike a more in-depth neuron simulator like Neuron, Nengo does not assign physical units to the “currents” or “voltages” within the simulation. Technically, I suppose the "current"s in Nengo could be considered Amperes, but it is important to note that 1A in Nengo does not equate to 1A in the real world. This is why we consider them unit less.