I’m trying to implement an integrator in Nengo.

I followed your documentation, but in step 3 you mention that the synapse of the connection between the input and the ensemble is tau, which is reasonable.

But then I find that you have already implemented such integrator built in in Nengo. But in its implementation you set that synapse as None.

Which implementation is the correct one?

There are two ways to implement this connection:

If we compare two identical integrators, with this being the only change, this is the result: 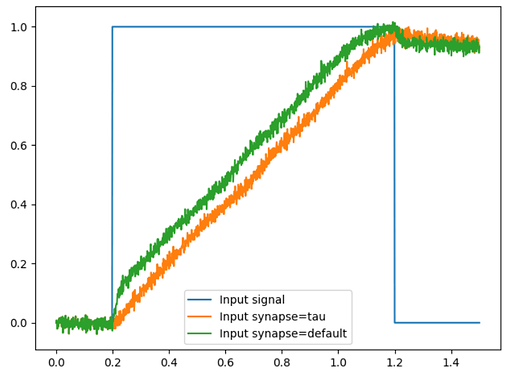 Now, an explanation to why the input synapse of the built-in integrator network is None instead of tau.
All of the built-in networks in Nengo follow similar interfaces. Regardless of how complex the network is, to make it straightforward for users to connect to and from the network, each network is standardized to have a .input and a .output object (these objects are typically nengo.Node objects).

When you connect to these networks then, you are actually connecting to the input and output objects. This, however, poses an issue. Consider, the integrator network as an example:

If you were to connect to the integrator network, for example like so:

this is actually what is happening under the hood:

Now, if you examine the code carefully, you’ll see that there are actually two connections between my_input and the integrator’s ensemble:

And, for each of these connections, a synapse can be assigned to it.

Suppose the integrator network’s input synapse is configured to tau by default. With these two connections, the connection chain would look like so:

To avoid this, the built-in networks in Nengo are thus configured such that all input synapses (for networks where the input synapse is not required to add some additional smoothing to the input signal) to have a synapse value of None. This allows the user to specify their own connection synapse value and be sure that the network behaviour reflects that.

Thank you for your detailed explanation @xchoo. Actually,

very interesting. I will test it to see what the difference is.

I now understand the logic behind. But I have a problem with this:

Since such a “contract” between Nengo and the users leads to not intuitive results when composite models.

Say I want to implement a PI controller (PID without the D) and I write a new network for it, something like:

In that case, there is a problem choosing the right synapse. If we were to connect to the PI network, like we did before:

There are two options:

1. Using None in the input synapse

If I follow Nengo’s contracts and use None in the synapse between pi.input and integrator.input, as you mentioned, the user will be responsible to use the correct tau, but that tau will also affect the proportional section, which is not desired:

2. Using tau in the input synapse

But if we use tau in the synapse between pi.input and integrator.input (like the Integrator network designed for), the user will have to use None outside, which is what you tried to avoid in your Integrator implementation:

Both ways are confusing. But using the rule that “input synapses have a synapse value of None”, makes it hard to composite models without breaking this rule.

Since such a “contract” between Nengo and the users leads to not intuitive results when composite models.

Yes, it is, and for this reason we only do this for networks that are relatively simple:

For more complex networks (e.g., the basal ganglia, thalamus networks), we tend to treat the network as a black box. That is to say that the synapses and parameters of the network are set in such a way that all the user has to do is connect to it, and it will perform the function as described.

The implementation of the PI controller would fall under the latter category. Since the PI controller has two parts (the P and I terms) that work in unison to perform a function, you’ll want to treat the system as a whole. Using your network diagram, there are then a few synapses you’ll need to determine:

There are a few network configurations you can use to build this PI network:

This network configuration is what I would consider the “ideal” network. That is to say, if you were to implement the network without any neurons the behaviour you get from this network will be close to ideal. With the input synapse to integrator.input set to tau, the integrator sub-network is “ideal”, and without any neurons to worry about, the synapse to proportional can be None since no filtering is applied.

Dealing with Neurons
There are two ways you can deal with the neuron spiking noise (and the need for filtering) with such a network. The first approach would be to leave the network as it is configured above:

and allow the user to specify the synapse to the entire PI network. This thus presents a filtered input to pi.input and the entire PI network will work on this filtered signal. It’s true that in this case, the integrator sub-network will essentially operate with 2 synapses (one default, one tau), but when you consider the overall behaviour of the PI network, mathematically, it is still correct (since the input presented to both the P and I terms are the same).

Another way to deal with neuron spiking noise is to specify that the user has to connect to the PI network with a synapse of None, and then setting the synapse on proportional to whatever you need it to be (I set it to the default in the diagram below):

In this instance, the integrator will be more “ideal” but there will be a slight lag between the proportional and integrator values since they are operating on differently filtered signals.

Both approaches are valid, and the differences in behaviour would be minor, but personally, I would implement the first approach.

@xchoo thank you again for your detailed explanation! I will go with the first approach and try it as well.

Note that I’ve corrected your original network diagram, whereby the synapse between integrator.input an integrator.ensemble should be None, rather than tau.

That’s right, my mistake. I will update my original post