How would you train a system which takes in two inputs, perform some unknown function on the inputs, and produces an output?

As an example, imagine when you have a system which is described like this :

which takes x1 and x2 and produces y. The dynamics are unknown but we have trails of data for x1, x2, and y.

How would you construct SNN to do the supervised learning of such systems?
I was doing something like this: 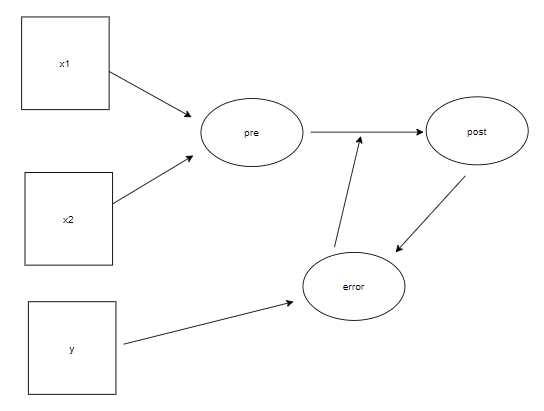 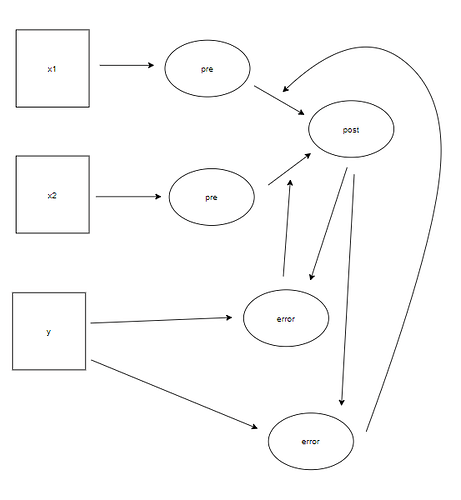 but none of the models seem to work.
Is this the correct way to use SNN for supervised learning?

All the example I saw for the supervised learning only has one input and one output which makes it simple to train the connection.

Is this the correct way to use SNN for supervised learning?

Constructing an SNN for supervised learning is kinda a black art. There is no real “correct” way to approach things, and the architecture of your network depends a lot on the problem you are trying to solve, or the dynamics you are trying to learn. For example, if you know that the inputs are independent of each other (e.g., you know that changing one input always has the same effect on the output, regardless of what the other input is), then a network similar to your second network would be the better approach. However, if you know that the inputs are dependent, or, you don’t know what the dependency is, the first network will probably be what you want.

There are other factors that affect the success of your network as well: the number of neurons you are using in the network, the learning rate, and the synaptic time constants all play a part.

All the example I saw for the supervised learning only has one input and one output which makes it simple to train the connection.

The Nengo examples page does have one example that trains a network using 2 inputs, and that is the “learning a product” example. In this example, the network is being trained to compute the product of two inputs, i.e., what is $x1 \times x2$. It is important to note that in this network, the “input” ensemble is 2 dimensional, and that the individual inputs ($x1$, and $x2$) are projected to the different dimensions of this ensemble. This is done so that the neurons in the input ensemble is able to represent information from both $x1$ and $x2$ (because the 2D tuning curves projects parts of $x1$ and $x2$ into the neuron activity), and in this way, the learning rule is able to modulate the decoders in such a way to be able to learn the two-dimensional product function.